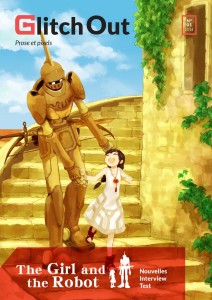 Glitch Out is a free French review from the website Le Renard Loquace about short stories and videogames. Each edition is dedicated to one indie game (it is The Girl and the Robot in the first edition and it will be Transistor in the second one), with a preview or a test of the game and an interview with the developers. There is also a call for short stories with a theme in relation with the game. However stories in Glitch Out are not fanfictions : they share their subjects with the game but they have their own background, their own questions, their own identity.

Azure is a short story about a little girl lost in a post-apocalyptic world, where rain is her worst enemy. It can destroy entire buildings and people wandering carelessly in the outside will probably never return. The only way to be safe is to find a shelter covered with ivy, which is not affected by rain. But ivy tends to leave quickly the inhabited places, forcing people to constantly move from one building to another. The story begins when Azure’s mother doesn’t come back and the little girl has to move to the next shelter all alone.

Current call for short stories is under the theme “Une voix, des voies” (One voice, many paths).

You can read it here. Good reading !